Hey! It’s Wednesday! You know what that means! It’s time for this week’s WCW or World Championship Wrestling! This week I have selected V.K. Wallstreet for my WCW! It was in the fall of 1995 when WCW Monday Nitro debuted and it was on that debut episode where Michael Wallstreet made his return to the company. By the following week Michael Wallstreet was now being called V.K.Wallstreet as a jab at WWE owner Vincent Kennedy McMahon. As 1995 came to a close and 1996 rolled on V.K. Wallstreet would get lost in the large WCW roster. In that same time Wallstreet would drop the V.K. name to go back to Michael and then to Mr. Wallstreet. By December of 1996 the faction of the New World Order or NWO was growing quickly and Mr. Wallstreet approached about joint the group, which he accepted. While being a member of the NWO Wallstreet wrestled in perhaps his highest profile match as he faced Jeff Jarrett at the January 1997 Souled Out pay per view. In April of that year Wallstreet’s NWO contract was declared null and void by WCW President J.J. Dillon due to his existing WCW contract, and Wallstreet was forced to leave the NWO. In the following weeks, Wallstreet would express his displeasure for WCW and occasionally wear anti-WCW shirts to the ring. By midsummer V.K. or Michael or Mr. Wallstreet if you will , left the company and headed to Japan. What was your favorite V.K. Wallstreet match ? 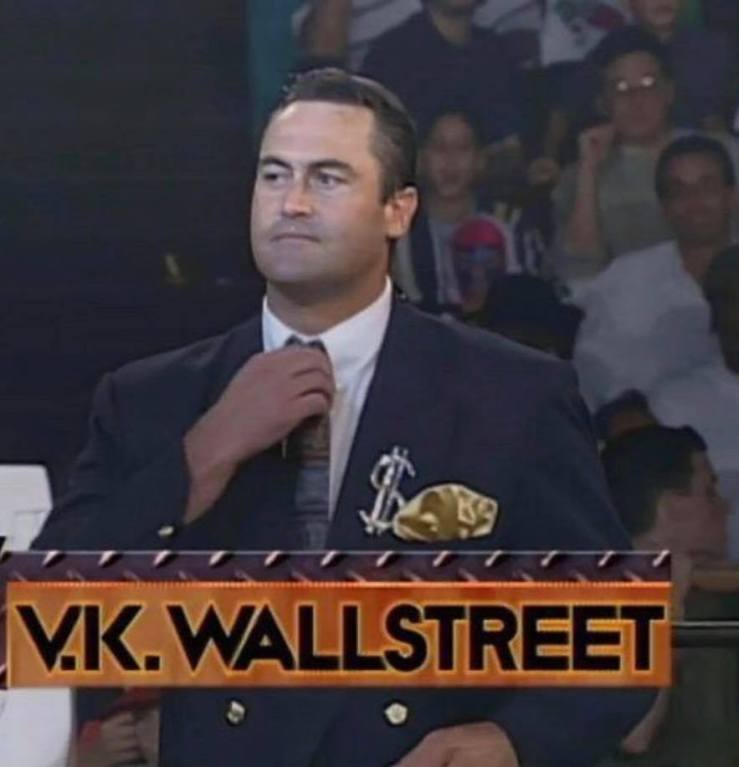 See all of Intern Mark’s WCW posts in the archives