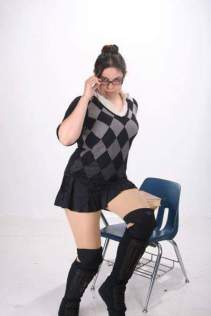 There are few times in the life of a wrestling journalist where you are fortunate enough to meet someone in the industry who has similar passions to you outside of the sport of wrestling. Being an English major in college, I am always looking for people who are able to use their passion for literature and transport that into their wrestling career. Recently, I was fortunate enough to be able to interview Paige Turner, a rising star in the wrestling industry down in Texas, who has been able to turn her librarian character into one of the most revered talents in the area. With literature and wrestling being two of my great passions, I jumped at the opportunity to speak with her and discuss her career, how it began, and where it is going to go.

Paige Turner started watching wrestling at the age of 14. Like many people in the industry, she was wary about the sport early on, knowing of it, but not knowing everything that goes into being a wrestler. Introduced to the sport by her brother, she saw wrestling initially as a distraction from her homework, but later grew to see wrestling as what she wanted to do outside of her schooling. Being inspired by wrestlers like Lita and Trish, Paige said that the most influential wrestler in her career as well as her own life was Chyna. This larger than life wrestler has been the inspiration for many to get in the ring, but Paige was able to be inspired by her outside of the ring as well, using her workout video as motivation to lose 30 pounds as a freshman in high school. In her current career, Paige has also drawn inspiration from Nicole Savoy, whose career she has been following since it began, and had the opportunity to work with her recently, gaining more in ring knowledge from a fellow wrestler.

The path to being a professional wrestler was a bit tougher for Paige, as she was going to school while trying to become a professional wrestler, which made her have to get private training to work around her education. Early on in her training career, at the age of 15, Paige was able to get a taste of training, going to Kidz Kamp, a local promotion down in Texas, where she got a one day training event, which culminated in getting to perform in the ring, which gave her the confidence to pursue this further as she got older. After getting her first job at a public library, Paige had a coworker who was a wrestler who introduced her to Professional Championship Wrestling in Arlington, TX. Getting her training while going to school was a rewarding experience, but given the hectic schedule of work, school, and training, Paige had to take a break from the ring until 2011, when she resumed her training at Metroplex Wrestling.

Training itself was a memorable experience for Paige, who said the most important thing she learned in the process was to listen. Not just listening to the person training you, but to listen to critiques, listen to your opponent when you’re in the ring, listen to the crowd, just soak it all in. Not coming from an athletic background, Paige’s timid nature and lack of coordination was a struggle for her, so listening played a big part in the advancement of her career.   While her coordination has improved with every year in the industry, she still has to remind herself to not be so timid when she enters the ring, as the crowd will not respond well to something like that.   However, getting over this was what led to her first career match, which she said happened by pure luck.

Getting into training was one thing for Paige, but getting into the ring was something she wanted to take her time with. After training for some time, Paige finally felt comfortable asking around to see if anyone could introduce her to some bookers for when she felt able. She message a friend on Facebook asking for assistance, and this friend called her that day and said she would like to wrestle Paige the next day at a military base in Oklahoma. Paige was hesitant, wanting to acquire gear first, so she initially turned down the offer, but a friend was able to talk her into it, and she hasn’t looked back since. The match itself went well, gaining praise from her opponent and the promoter, but Paige was critical of herself, wanting to know more about the in ring psychology.   Wrestling as a heel in her first match gave her an idea of where she wanted to go with her character.

With her first match out of the way, Paige was focused on creating a persona for herself in the ring. She wasn’t entirely sure which route she wanted to take, but was working as a librarian at the time, and decided to make that part of her life mix with her wrestling life. Drawing inspiration from a children’s book in her library, she settled on the moniker Paige Turner and landed on a finisher, the “Dewey Decimator”, which she said took some extra training to perfect. When asked about what types of books she enjoys, she said that she leans towards reading teen dystopian series, as well as “Boys from Brazil” by Ira Levin. She could narrow down any of her particular favorite literary characters that she could see translating into the wrestling ring, but did say so many seem like they’d fit right in with CHIKARA.

It seems like the sky is the limit for this 2-time IZW Queens Crown Champion, who still doesn’t think she has had a crowning achievement at this point in her wrestling career. Always looking to branch out and improve in the ring, Paige continues to push herself to be the best she can in the ring, preferring to be part of the action, as opposed to being a manager.   While her dream match would’ve been to face Molly Holly, who she feels she could have learned a lot from, Paige continues to just have the best possible match she can for the fans, against anyone, as she sees every match as a learning process. To anyone looking to get into the ring, Paige said her one piece of advice would be to find a great place to train, so that you have a strong foundation when you eventually get to the ring. Paige herself can be seen in the ring in the coming months back at IZW in Oklahoma, RCW in San Antonio, and VPW in Corpus Christi.